This article, written by IWITTS Executive Director Donna Milgram, provides recruitment strategies that law enforcement agencies can use to increase the number of women in their applicant pools. Numerous marketing techniques are discussed, such as segmenting, messaging, assessment, press coverage, and internet outreach. (April 2002)

By Donna Milgram, Executive Director, Institute for Women in Trades, Technology, and Science

Many police chiefs would like to increase the number of sworn women officers in their departments but find that there are few women in the applicant pool. This isn't surprising, since law enforcement remains a male dominated profession. Even in the year 2002, most women don't think of policing as a viable career choice because there are still few female role models in their own communities that they can look to. 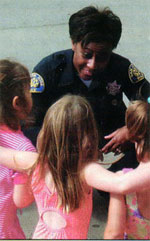 When law enforcement agencies reach out to qualified women and send them the message that they are welcome and valued, these departments are able to significantly increase the number of females in their training academies and ultimately on the force. The following agencies are among police departments that have increased the number of females as a percentage of recruits in their academies:

And the following agencies are among police departments that have increased the number of women officers as a percentage of the force:

How can other police chiefs achieve similar results? The following step-by-step guide is designed to provide some answers. It is informed by work done with police departments by the Institute for Women in Trades, Technology, and Science (IWITTS). IWITTS is a national nonprofit organization based in Alameda, California, that provides law enforcement agencies with the tools to recruit and retain women officers using research, training, technical assistance, publications, and e-strategies.

When police departments substantially increase their female applicant pool, they typically hire more female recruits.1 The key to achieving this increase is implementing women-specific recruitment strategies such as having a recruiting Web page for women or sponsoring a police career orientation for women. In the marketing world this practice is called "segmenting your market" based on demographics, and the accompanying "targeted marketing" strategies that result are considered to be the most effective.

Viewing recruitment as marketing may require a major paradigm shift for many law enforcement agencies. Law enforcement has traditionally regarded policing as a "calling" rather than a career choice. Nevertheless, that culture is slowly changing as police departments have struggled with a drastically decreased number of applicants in the past five years. While the events of September 11 have resulted in a spike in the number of public safety applications, it is unlikely that police agencies will return to the time when recruitment meant placing an advertisement in the local paper or having a display at the school career fair.

In IWITTS's national recruitment workshops, facilitators start by asking attendees (primarily sworn officers, both men and women) to talk about the messages women receive about being a police officer from police departments, training academies, schools, and others. Those messages are at best mixed and usually negative.

Police departments can counteract the strong negative messages women receive about law enforcement careers with their own strong, positive messages. The following types of messages should be a component of all recruitment efforts:

Before a police department develops a strategic recruitment plan to increase the number of women recruits, it should conduct a self-assessment to compare what it is doing to recruit women to the universe of known strategies.

It should also perform a statistical analysis of its selection process by gender to determine whether women are being disproportionately screened out at any stage. If, for example, an analysis documents that women are not hired because of a locally legislated preference for veterans of the armed services, only a strategy that focuses on targeting women veterans will succeed in increasing the female applicant pool. In that case, any other type of female-specific recruitment efforts would be a waste of a department's precious resources.

Finally, departments should determine which women-specific recruitment strategies would require the least amount of effort while likely yielding a high return and, as a second choice, which efforts would require high effort in exchange for a high return. Options will vary from one department to another. For example, a department with an internal Web designer may find developing a women-in-policing section of its Web site to be a low-effort, high-return strategy, while a department that relies on its city's overburdened Web designer may find it to be a high-effort, high-return activity.

Indicate whether the department has proactively recruited women (and minorities) using the following Internet strategies:

Increasingly, police departments and other employers are using the World Wide Web to recruit job applicants. The Internet offers an inexpensive way to reach thousands of potential applicants around the country. It serves as a primary venue for many twenty-somethings who are job-hunting, enables departments to provide in depth information about the department and the recruitment and selection process, and generates acutely needed tech-savvy applicants. 2 The California Highway Patrol found that the Internet is the number one way that its applicants learn of job openings.

The Internet is also a great way to recruit women applicants. The San Jose Police Department is a good case in point. Recruiting unit Sergeant Peggy Vallecilla analyzed her department's numbers in 2000 and found that in about one year's time the percentage of females in the academy had jumped from 8 percent to 50 percent, and the only change in recruitment practices was the department's creation of a women in policing section on its Web site. The women's section of the recruitment Web pages features biographies and photos of the department's diverse group of female officers. Not surprisingly, the 2000 recruitment survey found that the greatest number of applicants had learned of job openings by way of the department's Web site.

Include an e-list sign up on the women's page by using a free, easy-to-maintain email list such as the one on www. yahoogroups.com. This way, departments send an email message to multiple potential applicants at once. The email message would of course contain tips on preparing for the physical agility test, key dates, and information on the application process. The host maintains the subscriber list for the department.

Career fairs should be two or three hours long and should be held on the weekend or in the evening, as departments want to attract participants who are employed. One department held two shifts of the career fair-one in the afternoon and a second in the evening-so as to capture potential applicants who worked daytime hours and those who worked evenings.

The core elements of the women in policing career fair are as follows:

The press likes to do human-interest stories on women in law enforcement; departments that IWITTS has worked with have received positive print, television, and radio coverage of their efforts to recruit more women through a women-in-policing career fair. Some have also received coverage of the career fair itself.

Well in advance of the career fair, departments should issue press releases that include key statistics such as what percentage of law enforcement officers nationwide and in the department are women; quotes from women officers about how much they enjoy their jobs, and why; a quote from the chief; a note on the availability of female officers for interviews; and, of course, career fair information.

Some departments have chosen to hold press conferences. Keep in mind that the press always likes good visuals, so, if you have women officers in special operations, offer them an opportunity for a photo shoot. The Tucson Police Department, for instance, held a press conference featuring the department's helicopter and female pilot.

It is true that a picture is worth a thousand words. If a female applicant goes to the home page of a department's Web site and finds photos of only male officers, she is less likely to click through to the recruitment information than if she sees images of someone who looks like her. Departments seeking to attract female candidates should make sure that at least one third of the images on their Web sites, brochures, flyers, and other publications are images of women officers. Departments should have recruitment flyers as well as brochures; the Delaware State Police Department recruited several successful applicants by posting flyers in the women's locker room of a local health club.

Police departments should reach out to women who are physically active by posting flyers in places such as gyms; locker rooms of women's sport teams; and facilities for rock climbing, karate, kickboxing, and similar activities. One department recruited female candidates at an aerobics instructor conference.

Another good source for potential female candidates are women with hobbies that are traditionally dominated by males, such as aviation, skydiving, target shooting, and car restoration. Women in the military reserves and veterans' groups should also be pursued; contact your local military base to find out how to connect with them. Overall, connecting with women in these lesser-known groups has grown easier, as more and more of them maintain an Internet presence and email lists.

Departments should also consider its own civilian employees as potential applicants; after all, they are already connected to the department and understand its culture. Finally, women-specific recruitment flyers should go up in places women frequent, such as supermarkets, self-service laundries, and shopping malls.

*An increase in the female applicant pool may not result in more women hired. Several factors can screen women out of the process or otherwise prevent a department from capitalizing on a large pool of women applicants: a strongly weighted veterans preference; stringent physical agility requirements; and a reduction, especially in smaller departments, in the number of new hires made at any given time.

As Chief of the Albuquerque, New Mexico Police Department I had the opportunity to work closely with Donna Milgram and IWITTS. Their tools helped our Department accurately assess the current work environment and make changes that greatly improved our ability to recruit, retain and promote women officers considerably in a short time.