This fact sheet, based on successful strategies used by the Albuquerque and Tucson Police Departments to increase female and minority recruits, is chock full of practical strategies you can implement in your Department today.

The Albuquerque and Tucson Police Departments increased the number of female and minority recruits in the Academy using the strategies listed below. The results speak for themselves: 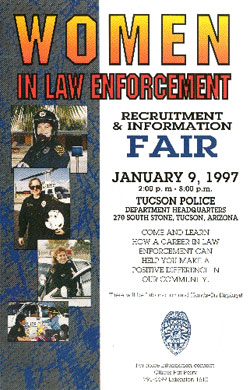 How to Greatly Increase the Pool of Qualified Female Applicants

Women in Policing Career Fair
Career Fairs for women by employers have been a very successful strategy for recruiting women into traditionally male occupations and have resulted in a stronger applicant pool. An orientation could consist of a panel of female role models, information about the job (i.e. schedules, duties, career ladders), information about the training academy and its paramilitary nature, a presentation on what it is like to work in a male-dominated occupation, information about the application process, information about physical conditioning, and information on women and policing organizations. The orientation enables the employer to communicate that women are welcome and sought after while providing women with a realistic picture of what the job is like. Career orientations are usually no more than two or three hours and should be held on a weekend or evening so that women already employed will have the opportunity to attend. A media and publicity campaign should be done to recruit women to the career fair.

Free Media Coverage that features female officers is the number one strategy for effective recruitment of women into traditionally male jobs.

Development and Mailing/Posting of Brochures/Flyers/Posters to a Targeted Recruitment List of Women
Some examples of recruitment sources:

Online Recruiting
Increasingly, departments are using the Internet to recruit candidates to policing. The Internet offers an inexpensive way to reach thousands of potential applicants around the country. It serves as a primary venue for many twenty-somethings who are job-hunting, enables departments to provide in depth information about the department and the recruitment and selection process, and generates acutely needed tech-savvy applicants. The California Highway Patrol found that the Internet is the number one way that its applicants learn of job openings.

You can also use online resources to communicate your female-friendly attitude toward women candidates. You can provide:

IWITTS developed and tested the strategies described on this fact sheet in collaboration with the Albuquerque Police Department under Chief Joseph Polisar as a part of the New Workplace for Women Project. This U.S. Department of Labor demonstration project provided intensive customized technical assistance to employers on how to recruit, retain and successfully integrate women into traditionally male jobs with a particular emphasis on minority women.

As Chief of the Albuquerque, New Mexico Police Department I had the opportunity to work closely with Donna Milgram and IWITTS. Their tools helped our Department accurately assess the current work environment and make changes that greatly improved our ability to recruit, retain and promote women officers considerably in a short time.