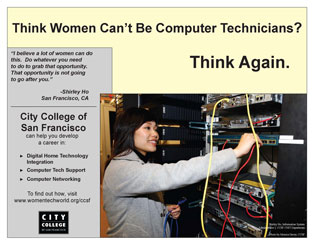 Six California community colleges successfully increased the average number of female students enrolling in targeted introductory technology courses through their participation in the CalWomenTech Project. Five of the colleges achieved significant increases ranging from 21.8% to 46.3% in introductory courses. The sixth college achieved a smaller 4.1% increase in introductory courses, and a substantial increase of 25% in advanced courses.

These CalWomenTech colleges experienced some of the greatest gains in percentage of female students during the CalWomenTech Project:

Two other CalWomenTech sites also experienced increases in female students in introductory courses (six colleges had some gain on average).

Over the course of the CalWomenTech Project, the colleges completed three recruitment plans each -- one for each year of their involvement in the Project. Typically, each plan contained five to ten broad recruitment strategies.

What became clear during the Project was that it takes multiple strategies over time to significantly increase the percentage of female students in a program and to maintain that gain in advanced courses. It is also clear that it takes longer for trades programs to see significant successes compared to computer-related programs. While computer-oriented programs saw signficant increases in a little more than a year, trades-focused programs didn't see significant gains in enrollment for two years.

The Steps to Successful Recruiting

Each of the eight CalWomenTech colleges committed to certain recruitment strategies at the outset, such as identifying female role models and obtaining photos and quotes to use in role model posters, brochures, flyers and a dedicated website section for women interested in the program. These four starter strategies -- with a few additions -- acted as template strategies that the colleges could all work on implementing right away to essentially build their own outreach and recruitment toolkits for use throughout the life of the Project and beyond. Other strategies employed by all eight colleges included a press strategy using template press releases provided by IWITTS, holding a career event or open house dedicated to their targeted program(s) and a role model banner to bring to events and hang on campus.

Here are the starter recruitment strategies used by all the colleges and turned into customizable templates by IWITTS in the Outreach Kit for use by all educators:

Here are some of the categories that the recruitment strategies from the college plans fall into:

Recruitment Tools for Your Program

What are some ways you can recreate the CalWomenTech Project recruitment strategies and success at your school?